Being a father is a huge responsibility. Not just in a way that father has to take care of the whole family, but also the demand of having emotional stability and ability to make decision. I bumped into this headline in Yahoo! about a 13-year-old Dad in England, called Alfie Patten.

He had one night of unprotected sex and now, everything seems so unreal in his eyes. The girl, 15-year-old Chantelle Staedman, gave birth to baby Maisie Roxanne last Feb 12. He thought it is good to have a baby, but he did not have the whole idea of having a child and being a Dad. He did not even know the price of the nappies.

The kid couples decided not to aborted the baby, which received positive response from anti-abortion Christian Charity, LIFE. Their decision to keep the baby is something good, but they have to think through the rest of their lives, as parents and also the life of baby Maisie. 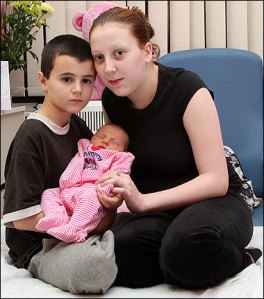 This story brings us into a reality that sex education needs to emphasizes more in the importance of having safe sex. Teens are in need to understand the outcomes of having unprotected sex and the danger of having sex in very young age. Teens are known with their curiousity and they are willing to do something new, without any knowledge of the outcomes.

We hope the story of Alfie will bring us into a better stage of preparing our teens in the future.