Choose Love Not Abuse is national program arranged by  a group of four final year undergraduates from the Wee Kim Wee School of Communication and Information (WKWSCI) at Nanyang Technological University (NTU). This program aims to save the victims of abusive partners in their relationships. The forms of abuses are physical, emotional, psychological and sexual. Victims are pushed to engage in an abusive cycle created by the abuser.

They have a campaign called Dating Violence Awareness Week (dvaw) on 7-14 February 2009 and they give talks during that event to raise awareness in young people about violence in relationships. I saw the video campaign on MTV a few days ago. It was so cool! Very up to date, had a taste of young people and got the message sent. You must have a slight of it, if you are so into MTV…

By the way, I also read an article in Indonesia newspaper Kompas (Feb 1, 2009) about abusive relationship. The woman was pushed to have sex with her partner. After some times, he dumped the woman and left her with scar in her life. She felt ashamed with what had happened but she kept on begging the man to get back to her. The psychologist, who’s the lecturer in Universitas Indonesia, said that woman has such a complex sexual relationships. Well, for me as a woman, I have to say that’s true. Woman tends to complicate things and add feeling while thinking upon something, especially sex. While for (some) men, sex is just another ordinary yet important necessity. 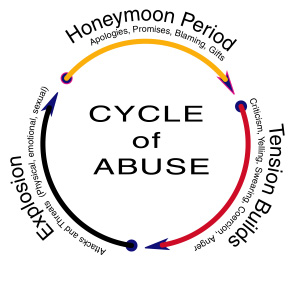 The cycle of abuse is repetitive and won’t stopped until one of the party kick out from that cycle. It is usually the victim who runs away and seeks heelp at some point. The abuser is having mental problems by thinking and saying that the abusive behavior is a way of showing affections.

Support for the program of choose love not abuse by young people of Singapore. It should be followed by other young people from around the world.

2 thoughts on “Choose Love Not Abuse”