I’ve been living my life as a part of community since I was very young. Just to name a few: scout, school magazine team, school organization, traditional music performers, volleyball team and Catholic youth groups. I just can’t let myself live solitary in this world. Community life bring me to the max of my capacity, because I can do more than I did for myself. I can push myself more when I’m surrounded with people who need my help (and vice versa).

The benefits of living in community life are too many to mentioned.

My family in Outbond Activities

Be part of a community and you will experience the benefits mentioned. All you need to do is make sure that you want to blend with others to gain more knowledge and understandings.

I never imagined that one day I would be a group leader for youth retreat. If it was not for Ike, then I might refused. Ike was one of my best friend. We were together in university (doing psychology) and still together when we worked in Jakarta and Cirebon. But guess what, I learnt a lot today…

Ike was the speaker on the session about ‘Who Am I?’ She could handle those bunch of teens who were barely know her. The session went well with about 50 teenagers altogether. The point that she made was the importance of self-image. How do they see themselves and how do they perceive others’ opinion about them. Sometimes teens are easily distracted by tiny-bity appearance problems (let’s say: weight gain, pimples, no boyfriend/girlfriend around) and ignore the more urgent matters (how to be fight our weaknesses, how to build good and healthy relationship with others). It is an important task for parents, teachers and those who are working in youth care to promote positive self-image, so the teens won’t get disappointed with what they have but working hard to boost their talents.

As a group leader, I was a bit awkward at first, but then I could blend with the teens. I could sense why parents are usually stuck with their teens. It seems that the age gap and different way to view the world have separated them away. My responsibility was to explain the process of the activities and make sure the whole group to finish their works. Each activity was designed to help the teens to understand more about themselves. At the 1st session, they were asked to write down 3 good and bad experiences in which they were labeled by others (for example: Teacher A said that I’m stupid, I feel sad OR Teacher B said that I’m creative, I’m so excited). Each experience then need to be match with certain feeling that followed. This introduction into feeling was made to help the teens understand that there are numbers of feelings, not just happy, sad, mad or excited. 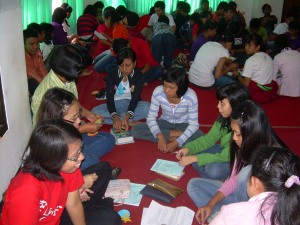 The 2nd session was designed for the teens to find about the strength of a friend on their left and a friend on their right side. It could help some teens to realized that others view them positively. Sometimes they just not realized their own strength. On the 3rd session, each person got a feedback from their closest friend in a group to fix their weaknesses and be more confidence with themselves. The feedback given must be in positive term, such as: you will look nicer if you brush your hair nicely OR you will make more friends if you can smile more often.

The final session was closed with 1.5 hour activity in which they drew their own universe in a paper. This activity was meant to help the teens to understand and realized the components of themselves and appreciate others who were meaningful to them (family, friends, teachers, those who sponsor their school fee, etc). And… I had a duty to close the session with short message for the participants. All I said was to boost their positive self-image by doing positive activities and be open to all the criticism and advices that come from others. Not to take the criticism without any thoughts but… critically think through it. 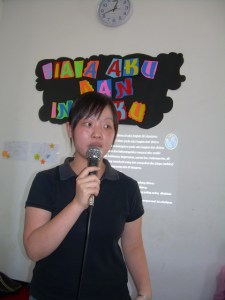