Tomorrow will be the last day of ‘This Is It’ movie in the theatre around the world, and I just watched it tonight. What I saw from that movie was the other side of Michael Jackson. He was showing his down-to-earth behaviors and he looked very humble. One of the crew said that he’s one of a kind, because it’s so rare to find pop star who’s able to control everything in hand, just like he did.

He makes sure that all the background and the visual effects are perfect (according to his standard). He also makes sure that all the musicians are counting on his clues, on when to start, when to keep the high note, or when to play a faster beat. It seems to be a normal request for every pop star who wants to perform their best, but … MJ got personality. He asks everybody to go along his will with LOVE. He always says that everything need to be rehearse and to be done for LOVE (he even spelled it L-O-V-E).

The first scene was a story behind the audition of the dancers. The choreographer said that the idea was to find the best fishes around the world and put them all into a pond. It means that the audition was opened for all professional dancers who want to participate in MJ’s concert and they came from all over the world! They loved MJ so much, that they were willing to travel halfway across the globe just to be part of the audition and wishing hard to be the chosen ones.

On one of the recordings, the dancers were trained by MJ himself. He was so careful to lead the group of 11 dancers (then reduced to be 10) and he was able to show off himself, in a positive way. All the dancers worshipped him and being in a stage with MJ was like their lifetime dream came true! But still, MJ was able to show his humbleness.

This is another bunch of talented and professional people. They were able to perform at their best level and still, able to be in the same direction with MJ’s will. They have been working with many other singers, but they said that nobody could beat MJ!

The skills that they have were amazing. I was like watching a real concert while I heard the blast of the drums and the melody threw by the guitars. It was a real experience! 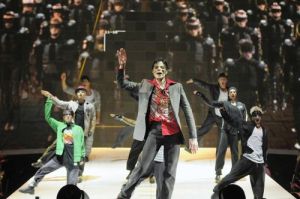 I am not a big fans of MJ personally, but I admire his music since I was a kid. I have his ‘Dangerous’ album in cassette, which almost can’t be played due to my habit of repeating the cassette all day long, for a few months in a row! He’s a great and talented musician, song writer, creative artist and person. I almost had tears, when I saw him waving at the end of the movie.

2 thoughts on “This Is It – Another Story of Michael Jackson”