I just finished viewing the complete video on ‘Really Achieving Your Childhood Dreams’ by Randy Pausch. I got it for free from www.cmu.edu.

He prepared that lecture for his 3 children, not for us (he called it the 2nd head fake). He had some points to deliver on the lecture.

When he talked about his childhood dreams, he did not hesitate to share it with us. He really got the motivation from that dreams and he worked hard enough to get them all done. Some of his dreams come true when he was already a professor. He’s able to tear down the words ‘too late’ for such childhood dreams.
2nd : Enable others to achieve their dreams.

While catching his dreams, he tried hard to enable others to achieve their dreams too! Like a story of his students who were together in a project called ‘Building Virtual World’. It was started as a class project and turned out to be something much bigger than that. So, he taught the class about computer science (which I don’t really get it) and had a project with his students. I believe it was part of his dream as an Imagineer, because his students then create their own virtual worlds as part of the project. 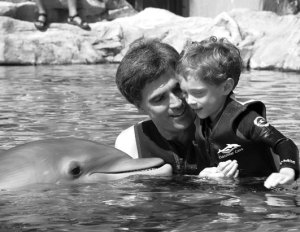 One thing that touched me so deep was his effort to enable his son to achieve his dream. He brought his oldest son to play with dolphins. He believed that his son won’t forget that soon. And I believe that’s a way that he chose to be remembered by his son…

If you have abandoned your childhood dreams, it’s time to catch them!