One day, I brought my students to the airport because we were going to travel around Asia. The journey was set to Singapore, Malaysia, Japan and then back to Indonesia. They need to check on their tickets, passport and belongings. The day was young and they were excited to start the journey! Yay…

They were not in a real airport, but in my classroom. I moved the chairs and tables to make larger space and tried hard to create a real airport situation. My main intention of doing this with my students was to make them understand about the important things that they need to carry while they are traveling. They did great (for some of them used to go abroad during holiday). So, the common rules were introduced, such as: queuing in the counter, showing up their tickets to the person in charge, wear seat belt and taking care for their belongings. 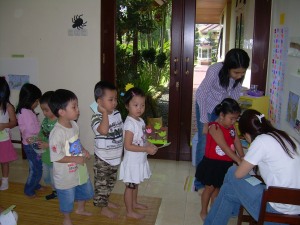 Queuing in the counter

Some of them were acting as a pilot and co-pilot too. Oh, you have to see how much they enjoyed it! They really loved to be in the cockpit. I explained the responsibility of the pilot and co-pilot, how they have to be very precise to look at co-ordinate and report anything that might harm the planes and passengers.

Even a girl can fly a plane

While visiting one country, I introduced to my students general information on that country. Culture, traditional customes & food and people who live in that country. Then, they need to make a wall map with photos and information attached. They worked as a group with assistance of a teacher.

Working as a group

They were also deal with numbers of activities of coloring, cutting and make their own Japanese paper dolls.

Finally, our trip around Asia has been done! We were happy with the trips and we will have upcoming trips soon!